Self-Sovereign Identity and Blockchain in the Healthcare Industry

At Wealize we have participated in diverse R&D projects in the field of Self-Sovereign Identity (SSI) using our knowledge and experience in Blockchain and Biometrics. We have also developed different related own products, like Identfy or Sabina.

Healthcare is a key case-use of the SSI model employing blockchain given the significance and scalability of this sectoral. In this article, we give you details about a pilot project developed for the Andalusian Health Service in Spain to evidence the feasibility of a vaccination card according to the Alastria Self-Sovereign Identity system based on Blockchain technology.

In the framework of a partnership agreement between Alastria and the Andalusian Health Service, it was determined to carry out a proof of concept to test the use of digital identity in the management process of verifiable medical credentials. This proof of concept was developed during the last months of 2020 in cooperation with the Spanish Andalusian Health Service (SAS), Alastria, Additum and Wealize.

The project started in October 2018, after Alastria had identified the Vaccination Card as a driving enabler for the use of the Self-Sovereign Identity model in the Healthcare System in Spain. The proof of concept started in June 2019 in the region of Andalusia with the cooperation of SAS and QS.  Impacted by the COVID-19 pandemic, in May 2020 the focus moved to the Covid-19 vaccination management. The final phase of the proof of concept commenced in September 2020 and was concluded in January 2021.

The objective of this pilot project was to prove the feasibility of a universal vaccination card for every citizen, accessible from the mobile phone and shareable with third parties in a safe and reliable way. According to these premises, it was necessary to implement a decentralized and self-managed digital identity model, in our ase, the Alastria ID model. 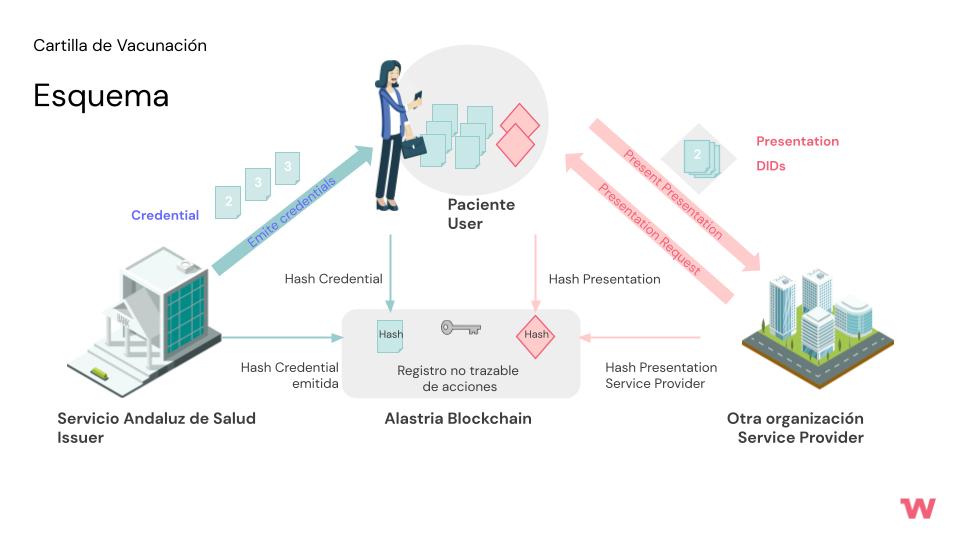 Goal of Alastria ID is to promote a decentralized digital identity solution based on Blockchain technology, so that users are the owners and keep the control of their data, without necessarily depending on third parties and managing their credentials autonomously, being able to directly share them and also to require the elimination of the same.

Alastria ID has substantially contributed to the UNE 71307 standard, the first global standard on decentralised digital identity management, based on Blockchain and Distributed Ledger Technologies (DLT). It has also served to build on the ESSIF (European Self-Sovereign Identity Framework) use case of EBSI, the first EU-wide blockchain infrastructure, driven by the public sector, in full respect of European values and regulations and fostered by European Blockchain Partnership (EBP). Furthermore, Alastria ID is aligned with the verifiable credential (VC) and decentralized identifiers (DIDs) standards of W3C.

During the proof of concept, at Wealize we successfully conducted following use-cases: creation of the self-managed digital identity through registration in the mobile app; connection to the health institution; vaccination records download, and sharing of vaccination data ensuring users privacy and autonomy.

Though the Alastria ID system is currently implemented in Alastria T Network, it can be used with any blockchain network that fulfills the requirements of Ethereum Enterprise Alliance. Among them, we will find the mentioned Alastria T as well as Quorum, Hyperledger Besu and even the one implemented by EBSI (European Blockchain Services Infrastructure).

If you are considering introducing or optimizing a decentralized and self-managed digital identity model to give your users and patients a better service and the ability of sharing and managing their data with complete privacy and autonomy, at Wealize we have the experience creating digital products that meet these requisites.

What is a Wealize Digital Product?

We explain why we introduce ourselves as a digital studio that creates digital products. We also bring use-cases of our digital solutions based on AI...

Self-sovereign identity explained, what is it and why do we need it?

What is a universal digital wallet?

The new generation digital wallet is the previous step to the universal wallet, the solution to store and manage, beyond cryptocurrencies, any type...